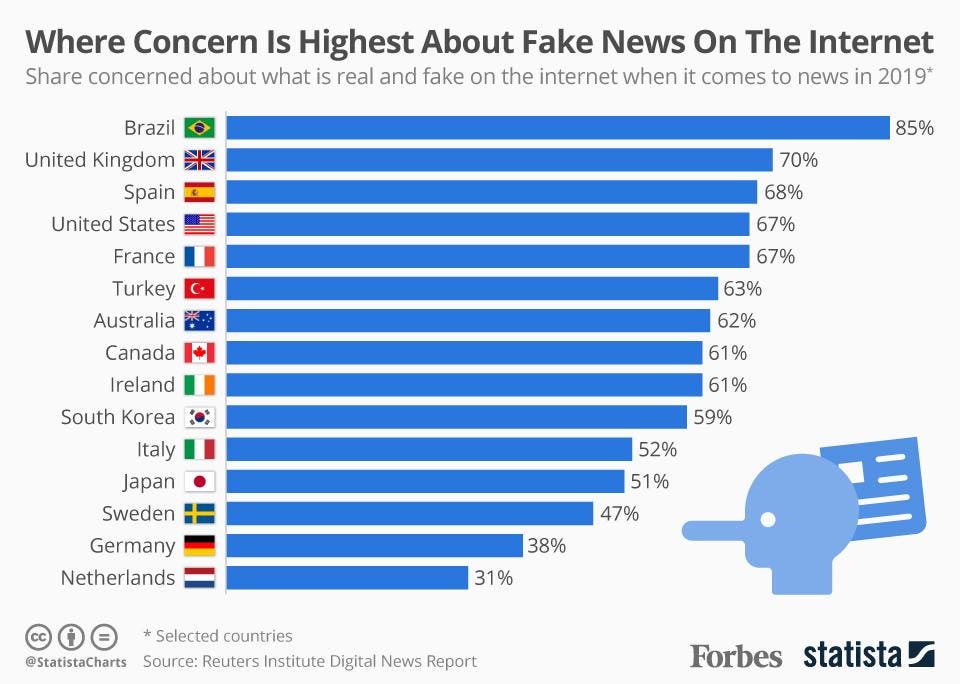 The 2019 edition of the Reuters Institute Digital News Report has been published against a backdrop of rising populism and political and economic instability. In this era of fake news, the research found that trust in the news has fallen 2 percentage points across all markets, dropping from 44% to 42%. Trust levels are even lower in distributed environments such as social media where it stands at just 23%. With misinformation and disinformation rampant on the internet, just how worried do people get about fake news?

When it comes to concern about what is real and what is fake on the internet in terms of news, Brazil has the highest share of worried respondents at 85%, according to the Reuters Institute. The following infographic provides an overview of the situation across a selection of 15 countries from the report. Given the level of division in the United Kingdom amid its turbulent exit from the European Union, it saw the biggest jump in concern out of any country in the study since last year. Concern about fact and fiction in online news increased by 12 percentage points since the 2018 report and it now stands at 70%.

Given the extent to which the term “fake news” has become established in U.S. society since Donald Trump became president, how do Americans feel about disinformation in online news? The research found that 67% of its U.S. respondents were concerned about the issue, with the same share recorded in France. In countries that are less polarized, such as Germany and the Netherlands, concern is far lower at just 38% and 31% respectively. One consequence of all this concern seems to be a greater awareness of and reliance on trusted news brands. Across all of the countries in the report, 26% of people have started relying on “more reputable” news sources while 24% said they’d stopped using sources with “a less accurate reputation”.

SFI to protest against varsity regarding recruitment application fee